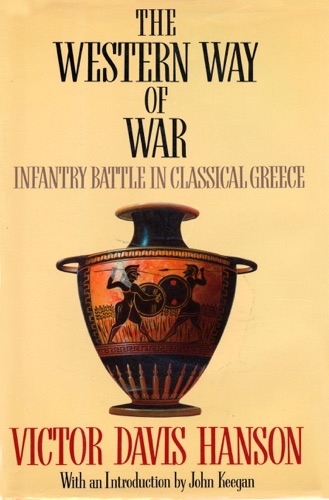 The Greeks of the classical age invented not only the central idea of Western politics--that the power of state should be guided by a majority of its citizens--but also the central act of Western warfare, the decisive infantry battle. Instead of ambush, skirmish, maneuver, or combat between individual heroes, the Greeks of the fifth century b.c. devised a ferocious, brief, and destructive head-on clash between armed men of all ages. In this bold, original study, Victor Davis Hanson shows how this brutal enterprise was dedicated to the same outcome as consensual government--an unequivocal, instant resolution to dispute.

The Western Way of War draws from an extraordinary range of sources--Greek poetry, drama, and vase painting, as well as historical records--to describe what actually took place on the battlefield. It is the first study to explore the actual mechanics of classical Greek battle from the vantage point of the infantryman--the brutal spear-thrusting, the difficulty of fighting in heavy bronze armor which made it hard to see, hear and move, and the fear. Hanson also discusses the physical condition and age of the men, weaponry, wounds, and morale.

This compelling account of what happened on the killing fields of the ancient Greeks ultimately shows that their style of armament and battle was contrived to minimize time and life lost by making the battle experience as decisive and appalling as possible. Linking this new style of fighting to the rise of constitutional government, Hanson raises new issues and questions old assumptions about the history of war.