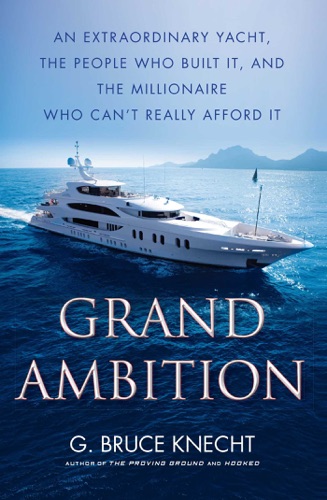 G. Bruce Knecht, former reporter for The Wall Street Journaland author of The Proving Ground and Hooked, describes the creation of an outsized yacht in a sweeping narrative centered on the men and women who made it happen.

Doug Von Allmen, a self-made man who grew up in a landlocked state dreaming of the ocean, was poised to build a 187-foot yacht that would cost $40 million. Lady Linda would not be among the very largest of the burgeoning fleet of oceangoing palaces, but Von Allmen vowed that it would be the best one ever made in the United States. Nothing would be ordinary. The interior walls would be made from rare species of burl wood, the floors paved with onyx and exotic types of marble, the furniture custom made, and the art specially commissioned.

But the 2008 economic crisis changed everything. Von Allmen’s lifestyle suddenly became unaffordable. Then it got worse: desperate to reverse his losses, he fell for an audacious Ponzi scheme. Would Von Allmen be able to complete Lady Linda? Would the shipyard and its one thousand employees survive the financial meltdown?

The divide between the very rich and everyone else had never been greater, yet the livelihoods of the workers, some of them illegal immigrants, and the yacht owners were inextricably intertwined. In a sweeping, high-stakes narrative, the critically acclaimed author of The Proving Ground and Hooked weaves Von Allmen’s story together with those of the men and women who are building his yacht. As the pursuit of opulence collides with the reality of economic decline, everyone involved in the massive project is forced to rethink the meaning of the American Dream.