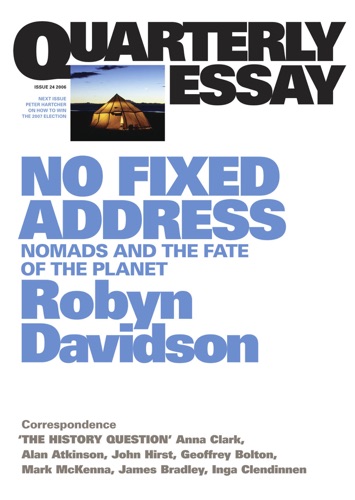 After many thousands of years, the nomads are disappearing, swept away by modernity. Robyn Davidson has spent a good part of her life with nomadic cultures – in Australia, north-west India, Tibet and the Indian Himalayas – and she herself calls three countries home. In this Quarterly Essay, she draws on her unique experience to delineate a vanishing way of life.

In a time of environmental peril, Davidson argues that the nomadic way with nature offers valuable lessons. Cosmologies such as the Aboriginal Dreaming encode irreplaceable knowledge of the natural world, and nomadic cultures emphasise qualities of tolerance, adaptability and human interconnectedness. She also explores a notable paradox: that even as classical nomadism is disappearing, hypermobility has become the hallmark of modern life. For the privileged, there is an almost unrestricted freedom of movement and an ever-growing culture of transience and virtuality.

‘I watched him out of the corner of my eye. A man unused to sitting still, restless hands, darting eyes. Looking for water, feed, camping places, villages for food and medicine, thinking '... when will the cotton here be harvested, should we risk that jungle area ...' - calculating, observing, comparing, deducing, holding massive amounts of information in the head, juggling it around - the paradigm of human intelligence. This was what nomadism required - resilience, resourcefulness, versatility, flexibility.’ —Robyn Davidson, No Fixed Address

‘No Fixed Address is a fascinating and learned account of lives unknown to most of us ... remarkable.’ —Eric Rolls, author of A Million Wild Acres

‘It’s her clear-eyed no b******t honesty that I most admire. Robyn Davidson is, without doubt, free. And being free is hard work.’ —Anna Krien, Dumbo Feather

Robyn Davidson is an award-winning writer who has travelled and published widely. Her books include Tracks, Desert Places, Quarterly Essay 24: No Fixed Address – Nomads and the Fate of the Planet and, as editor, The Picador Book of Journeys. Her essays have appeared in Granta, the Monthly, the Bulletin, Griffith Review and in several previous editions of the Best Australian Essays, among others.