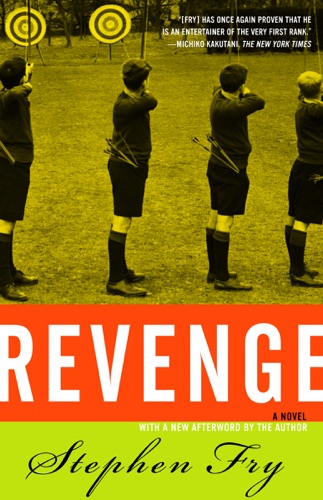 A distinct departure from his popular comic novels, this haunting, provocative tale of wrongful imprisonment and violent retribution is Stephen Fry’s first thriller. A brilliant recasting of the classic story The Count of Monte Cristo, Revenge crackles with the wit and intelligence readers have come to expect from this hugely talented author, actor, and comedian, yet it reveals an intriguingly deep, much darker side of his imagination.
Ned Maddstone is a happy, charismatic Oxford-bound seventeen-year-old whose rosy future is virtually preordained. Handsome, confident, and talented, newly in love with bright, beautiful Portia, his father an influential MP, Ned enjoys an existence of boundless opportunity. But privilege makes him an easy target for envy, and in the course of one day Ned’s charmed life is changed forever. A promise made to a dying teacher combined with a prank devised by a jealous classmate mutates bewilderingly into a case of mistaken arrest and incarceration. Drugged and disoriented, Ned finds himself a political prisoner in a nightmarish, harrowing exile, far from home and lost to those he loves. Years pass before an apparently mad, obviously brilliant fellow inmate reawakens the younger man’s intellect and resurrects his will to live. The chilling consequences of Ned’s recovery are felt worldwide.
While Revenge breaks new ground with its taut plotting, exhilarating pace, and underlying air of menace, its sophistication and irreverent humor are vintage Fry—a gloriously rich mix that only he could deliver. His first novel in four years is a dramatic, powerful tour de force that is sure to enlarge the American audience for this singularly talented author’s work.