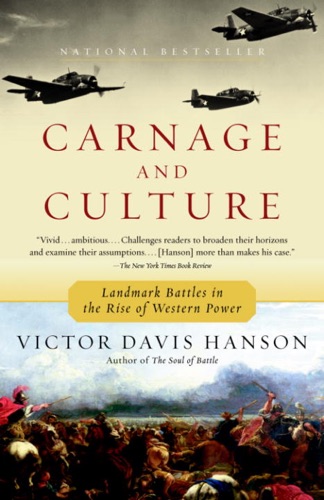 Examining nine landmark battles from ancient to modern times--from Salamis, where outnumbered Greeks devastated the slave army of Xerxes, to Cortes’s conquest of Mexico to the Tet offensive--Victor Davis Hanson explains why the armies of the West have been the most lethal and effective of any fighting forces in the world.

Looking beyond popular explanations such as geography or superior technology, Hanson argues that it is in fact Western culture and values–the tradition of dissent, the value placed on inventiveness and adaptation, the concept of citizenship–which have consistently produced superior arms and soldiers. Offering riveting battle narratives and a balanced perspective that avoids simple triumphalism, Carnage and Culture demonstrates how armies cannot be separated from the cultures that produce them and explains why an army produced by a free culture will always have the advantage.