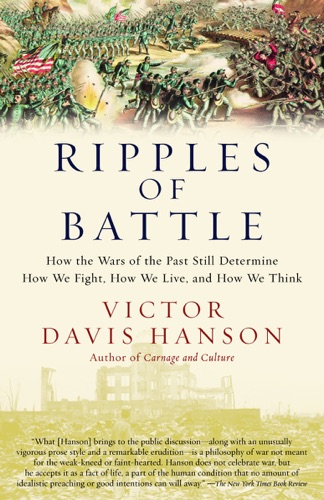 The effects of war refuse to remain local: they persist through the centuries, sometimes in unlikely ways far removed from the military arena. In Ripples of Battle, the acclaimed historian Victor Davis Hanson weaves wide-ranging military and cultural history with his unparalleled gift for battle narrative as he illuminates the centrality of war in the human experience.

The Athenian defeat at Delium in 424 BC brought tactical innovations to infantry fighting; it also assured the influence of the philosophy of Socrates, who fought well in the battle. Nearly twenty-three hundred years later, the carnage at Shiloh and the death of the brilliant Southern strategist Albert Sidney Johnson inspired a sense of fateful tragedy that would endure and stymie Southern culture for decades. The Northern victory would also bolster the reputation of William Tecumseh Sherman, and inspire Lew Wallace to pen the classic Ben Hur. And, perhaps most resonant for our time, the agony of Okinawa spurred the Japanese toward state-sanctioned suicide missions, a tactic so uncompromising and subversive, it haunts our view of non-Western combatants to this day.