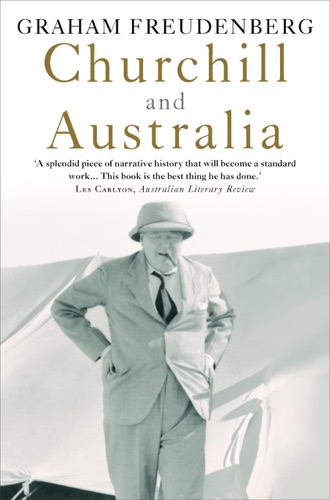 "Australia seemed to bring out the worst in Winston Churchill. Often enough to form a discernible pattern, Australia found itself on the wrong side of the very qualities-his strength of will, singleness of purpose, his refusal to 'give way, in things great or small, large or petty', the power of his imagination to set grim reality at defiance, his mastery of the English language-that made Winston Churchill, as the philosopher Isaiah Berlin described him, 'the saviour of his country, the largest human being of his time'."

Winston Churchill was a titan of the 20th Century, universally acknowledged as one of the greatest leaders of his age. Yet his relationship with Australia was a fraught one, tainted by the military failure of the Gallipoli campaign in the First War, and the disaster of Singapore in the Second. Churchill the patrician, descendant of dukes, could not appreciate Australia's dearly held egalitarianism, while Churchill the imperial statesman was impatient, and at times intolerant, of Australia's growing urge towards independence. The relationship between the two would span the first 50 tumultuous years of the 20th Century, from the Boer War through to opening salvoes of the Cold War, and act as a fascinating backdrop to Australia's maturity from a collection of autonomous colonies to full nationhood.

Written with extraordinary narrative verve, and relying on exhaustive research and a true insider's knowledge of the political world, this is history written at its compelling best.

Winner of the Walkley Award for Non-fiction 2008