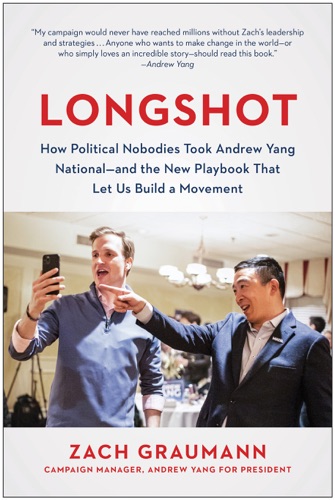 In Longshot, Andrew Yang’s campaign manager takes you on a tour through the ups, the downs, and the math of Yang’s 2020 campaign for president, and shares the playbook his team used to navigate the attention economy.

Andrew Yang did not win the 2020 Democratic primary, let alone the presidency of the United States. But chances are you know who Andrew Yang is, and you may well be part of the 75 percent of Americans who now support Universal Basic Income—both facts that would have seemed beyond unlikely at the start of Yang’s campaign. That campaign was helmed by Zach Graumann: entrepreneur, marketing expert, and, at the time, political nonentity. In fact, when Graumann joined Yang 2020, no one on the team was an expert in campaigning, but they all shared a fervent desire to change the future.

Yet, despite that inexperience, by the time Yang dropped out of the race in early 2020, he’d not only outlasted six senators, four governors, and three members of Congress, he’d become one of the most recognizable, popular political figures in the country.

Now, for the first time,, Graumann tells the story of how Yang went from nobody to national presence, breathing life into the behind-the-scenes antics of the unusual campaign that started a movement. In the process, he demystifies the world of political campaigns and provides takeaways that will help not only the next generation of campaign managers, but anyone who wants to break into a new industry—or stand out in their current one.

A book for everyone from members of the Yang Gang who want the inside story to businesspeople looking for self-improvement to anyone who has ever had a dream that felt bigger than they were, Longshot reminds you that sometimes, longshots aren’t quite as long as you think.

Harry Potter and the Cursed Child - Parts One and Two by J.K. Rowling, John Tiffany & Jack Thorne - Canon Powershot Sx60 Hs: Easy Guide by Gack Davidson - 121 Tips for Better Bridge by Paul Mendelson - Poker by Ryan Chandler - Delphi Complete Works of Pierre-Auguste Renoir by Pierre-Auguste Renoir - Fallen Idols by Alex Von Tunzelmann - The Tao of Audience Development for the Arts: Philosophies About Audience Development Five Years In the Making by Shoshana Danoff Fanizza - The Mother and The Father by Christopher Hampton & Florian Zeller - A Burglar's Guide to the City by Geoff Manaugh - The Painted Veil by W. Somerset Maugham -