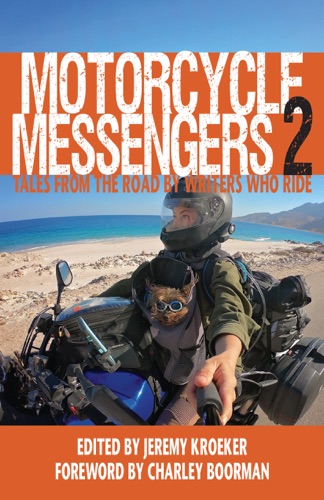 Motorcycle Messengers 2 is another collection of stories from some of the leading writers in the motorcycle travel genre ... plus a few people you've never heard of. Consider it a sample pack of authors. Rekindle memories of your own trips, find inspiration for new rides, or learn a few lessons from those who have done things the hard way. Above all, enjoy the journey.

- Billy Ward spends a night out beside a broken motorcycle, considering defence strategies against hungry lions and lascivious hippos in Africa.
- Carla King wrestles with conflicting emotions after crashing her motorcycle in India.
- Sam Manicom battles bulldust and heat exhaustion in the outback of Australia.
- Lois Pryce bonds with a one-legged retired army General while singing "The Final Countdown" in Iran.
- Ed March gets a drunken idea for a stupid, pointless adventure and, in spite of sobering up later, still carries on with it in Mongolia.
- Allan Karl pushes his luck by asking for change when he is forced to bribe a police officer in Guatemala.
- Paddy Tyson surrenders to fate, gets pummelled by a barber, and finds himself caught up in a high-speed chase in Nepal.
- Jeremy Kroeker discovers that his days of crashing motorcycles are not yet behind him in Colombia.
- Ted Simon encounters a healer, of sorts, who helps restore in him a sense of wonder for the journey in Thailand.
- Antonia Bolingbroke-Kent sidesteps "death by hubris" on her solo ride through the jungles of Vietnam, Laos, and Cambodia.
- Chris Scott attempts to become the first man astride a Honda SS50 to break the coveted "Mach 0.0525" barrier in England.