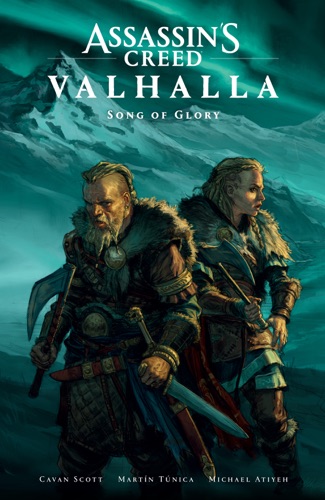 Tensions escalate when a village caught between two rival kingdoms is brutally raided. Eivor, warrior and daughter of wise King Styrbjorn, dispatches the raiders, rescues the villagers, and claims the settlement for her father. She also seizes a prisoner--a woman, Gull, left behind by the rivals--who declares she possesses the secrets of Asgard itself. But there is more to Gull than meets the eye, and her capture will bring death and destruction to Eivor's family. In disgrace and lured by the promise of treasures and glory, Eivor undergoes a dangerous quest to regain her honor, but what terror awaits in the forgotten temple of a powerful god? All the time, her brother Sigurd forges his own legend while searching for fortune in the lands of the East. Far from home, he finds new weapons and fresh plunder, making a discovery that will change his destiny forever . . .

The Assassin's Creed universe expands with a Viking epic brought to you by writer Cavan Scott (Star Wars: The High Republic, Doctor Who, Shadow Service) with art by Martin Tunica (Crossed Plus One Hundred), and colors by Michael Atiyeh (Star Wars, The Division, Dragon Age)!