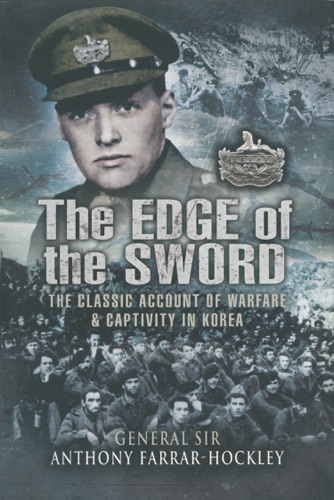 An account of the 1st Battalion, Gloucestershire Regiment, at the Battle of Imjin River during the Korean War and the survivors’ captivity in a POW camp.

In April 1951, at the height of the Korean War, Chinese troops advanced south of the 38th parallel towards a strategic crossing-point of the Imjin River on the invasion route to the South Korean capital of Seoul. The stand of the 1st Battalion, the Gloucestershire Regiment, against the overwhelming numbers of invading troops has since passed into British military history. In The Edge of the Sword General, Sir Anthony Farrar-Hockley, then Adjutant of the Glosters, has painted a vivid and accurate picture of the battle as seen by the officers and soldiers caught up in the middle of it. The book does not, however, end there. Like the majority of those who survived, the author became a prisoner-of-war, and the book continues with a remarkable account of his experiences in and out of Chinese prison camps. This book is not an attempt at a personal hero-story, and it is certainly not a piece of political propaganda. It is, above all, an amazing story of human fortitude and high adventure.