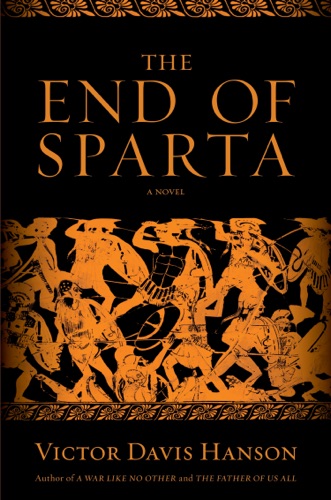 In this sweeping and deeply imagined historical novel, acclaimed classicist Victor Davis Hanson re-creates the battles of one of the greatest generals of ancient Greece, Epaminondas. At the Battle of Leuktra, his Thebans crushed the fearsome army of Sparta that had enslaved its neighbors for two centuries.
We follow these epic historical events through the eyes of Mêlon, a farmer who has left his fields to serve with Epaminondas-swept up, against his better judgment, in the fever to spread democracy even as he yearns to return to his pastoral hillside.
With a scholar's depth of knowledge and a novelist's vivid imagination, Hanson re-creates the ancient world down to its intimate details-from the weight of a spear in a soldier's hand to the peculiar camaraderie of a slave and master who go into battle side by side. The End of Sparta is a stirring drama and a rich, absorbing reading experience.
Praise for Victor Davis Hanson:
"I have never read another book that explains so well the truth that 'war lies in the dark hearts of us all' but that history offers hope."-William Shawcross on The Father of Us All
"Few writers cover both current events and history-and none with the brilliance and erudition of Victor Davis Hanson."-Max Boot on The Father of Us All"Enthralling."-Christopher Hitchens on The Western Way of War