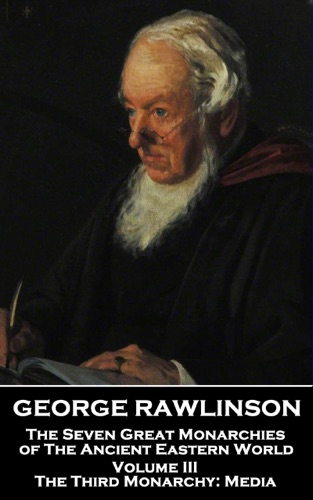 George Rawlinson was born on 23rd November 1812 at Chadlington, Oxfordshire. He was the younger brother to the eminent Assyriologist, Sir Henry Rawlinson.

Rawlinson took his degree at Trinity College, Oxford in 1838. Here he also enjoyed playing cricket and was considered to have been a rare talent at the sport. In 1840 he was elected to a fellowship at Exeter College, Oxford. After being ordained in 1841 he became, from 1842 to 1846, a tutor there as well.

In 1846 Rawlinson married Louisa, the daughter of Sir RA Chermside.

His progress continued to be rapid and varied in acknowledgement of his undoubted talents. In 1859 he was made a Bampton lecturer, and was Camden Professor of Ancient History from 1861 to 1889.

By 1872 Rawlinson was appointed canon of Canterbury, and after 1888 he was rector of All Hallows, Lombard Street.

In 1873, he was made proctor in Convocation for the Chapter of Canterbury.

As a scholar he produced, either on his own or in collaboration, several works which are greatly thought of even to this day. His translation of the History of Herodotus (in collaboration with Sir Henry Rawlinson and Sir John Gardiner Wilkinson), 1858–60; The Five Great Monarchies of the Ancient Eastern World, 1862–67; which was later expanded to include The Sixth Great Oriental Monarchy (Parthian), 1873; and The Seventh Great Oriental Monarchy (Sassanian), 1875. Among his other works were Manual of Ancient History, 1869; Historical Illustrations of the Old Testament, 1871; The Origin of Nations, 1877; History of Ancient Egypt, 1881; Egypt and Babylon, 1885; History of Phoenicia, 1889; Parthia, 1893; Memoir of Major-General Sir HC Rawlinson, 1898.

His lectures to an audience at Oxford University on the topic of the accuracy of the Bible in 1859 were published as the apologetic work The Historical Evidences of the Truth of the Scripture Records Stated Anew in later years.

Despite this somewhat prodigious output and alongside his other clerical and family duties he contributed to the Speaker's Commentary, the Pulpit Commentary, Smith's Dictionary of the Bible, and various similar publications.