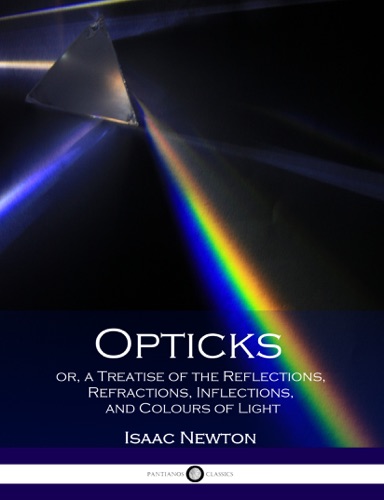 Newton's treatise concerning the behaviour of light is published here in full, complete with the original illustrations and tables.
In this work, Newton primarily focuses on how light behaves when refracted within a prism or lense. Prior to Newton's examinations, it was assumed that prisms and other refracting instruments simply produced the colors by themselves. However via thorough experimentation and observation, Newton proved that the colors are in fact already present in light, and that the prism simply separates them so as they are visible to the naked eye.
Together with his groundbreaking discovery, Opticks examines light as it behaves through a variety of solid mediums. Newton would use many tools, from shaded and colored glass to mirrors to study and record how light behaved under a variety of conditions. Newton eventually manages to organise every color into a circle, which successfully explains how each hue is related to others.
Newton's experiments are detailed in full with accompanying images which illustrate the shapes, angles and procedures each entails, while tables record the figures which Newton used. This data allows experimenters to reproduce and verify the results personally. For its thorough use of logic and the scientific method, Opticks has become regarded as one of the finest works of Enlightenment era science.
When Newton first presented his discoveries to the Royal Society, they aroused sharp criticisms from his contemporaries both in England and in Europe. Many disputed all or some of his conclusions and methods, with the scientist Robert Hooke giving a particularly withering critique of Newton's Corpuscular theory of light.
As a result, the Opticks was not formally published until 1703 following Hooke's death. It received several revisions and additions from Newton until his death in 1726 or 1727 - most notably to the Queries at the end of the book. Many of these deal with completely different scientific subjects, such as the behaviour of chemicals and the nature of gravity. Despite their title, the Queries are purely rhetorical in form, and Newton makes a strident attempt at answering and discussing each.