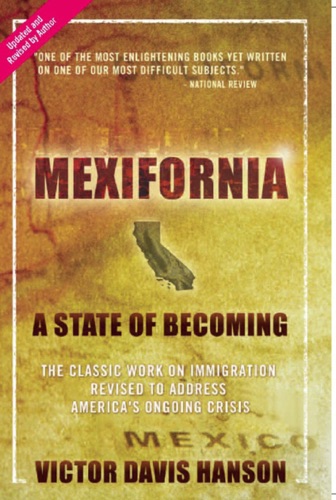 Victor Davis Hanson locates the cause of our immigration quagmire in the opportunistic coalition that stymies immigration reform and, even worse, stifles any honest discussion of the present crisis. Conservative corporations, contractors and agribusiness demand cheap wage labor from Mexico, whatever the social consequences. Meanwhile, “progressive” academics, journalists, government bureaucrats and La Raza advocates see illegal aliens as a vast new political constituency for those peddling the notion that victimhood, not citizenship, is the key to advancement. The troubles Hanson identifies may have reached critical mass in California, but they also affect Americans who inhabit “Mexizona,” “Mexichusetts” and other states of becoming.

Hanson follows the fortunes of Hispanic friends he has known all his life—how they have succeeded in America and how they regard the immigration quandary. But if Mexifornia is an emotionally generous look at the ambition and vigor of people who have made California strong, it is also an indictment of the policies that got California into its present mess. In the end, Hanson is hopeful that our traditions of assimilation, integration and intermarriage may yet remedy a predicament that the politicians and ideologues have allowed to get out of hand.