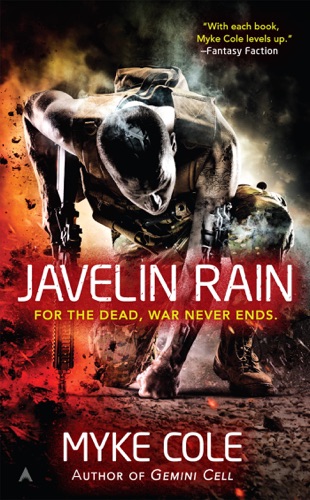 The fast-paced, adrenaline-filled sequel to Gemini Cell, set in the same magical and militaristic world of the acclaimed Shadow Ops series.

Javelin: A code denoting the loss of a national security asset with strategic impact.

Rain: A code indicating a crisis of existential proportions.

Javelin Rain incidents must be resolved immediately, by any and all means necessary, no matter what the cost...

Being a US Navy SEAL was Jim Schweitzer’s life right up until the day he was killed. Now, his escape from the government who raised him from the dead has been coded "Javelin Rain." Schweitzer and his family are on the run from his former unit, the Gemini Cell, and while he may be immortal, his wife and son are not.

Jim must use all of his strength to keep his family safe, while convincing his wife he’s still the same man she once loved. But what his former allies have planned to bring him down could mean disaster not only for Jim and his family, but for the entire nation...